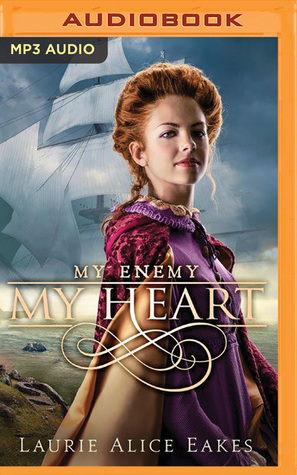 My Enemy, My Heart

by Laurie Alice Eakes
The sea is Deirdre MacKenzie’s home, and the crew of her father’s Baltimore clipper is the only family she loves. She’s happier wearing breeches and climbing the rigging of the Maid of Alexandria than donning a dress and learning to curtsy. But when the War of 1812 erupts, the ship is captured by a British privateer, leaving her father, the captain, dead. Deirdre watches her crew herded into the hold, destined for the notorious Dartmoor prison in England. Though her fate as a noncombatant is uncertain, she knows she must find a way to free her crew.

Kieran Ashford has caused his family one too many scandals. On his way to exile in America, he is waylaid by the declaration of war and a chance to turn privateer and make his own fortune. But he regrets his actions as soon as the rich prize is secured. Now his best chance at redeeming himself in the eyes of his family is to offer Deirdre the protection of his name in marriage.

But love and loyalty clash as Kieran begins to win Deirdre’s heart despite her plot to betray him. Will Kieran’s plan mend the relationship with his family, and can this fated couple find true love despite the secret lies between them?

Review:
Rating: 3/5 stars
Release Date: November 15th 2016
Publisher: Brilliance Audio
I don’t often have this problem…I’m not really sure how to rate this one. I don’t hide the fact that I don’t like romance for the sake of romance, so rarely read romance unless it’s a subgenre such as fantasy romance, or a retelling, so in that case, I was really impressed with this one. But that siad, compared to all the books I read this year… this one just doesn’t compare. So if you like a clean romance, by all means check this one out! I really enjoyed the couple, and even liked some of the side characters. The plot was interesting, and the story well written. I’m not sure why this was considered Christian, it’s not, while the MCs are abstinate before marriage, it has no religious mentions at all. It is a clean romance, plain and simple. If you are like me, and tend to avoid romance novels though, you might want to skip this one, as it’s not ground breaking, and though enjoyable, isn’t the best I’ve read. That said, I would give it 5 stars as a romance book, since I want to know what happened to some of the characters the end of the book, but 3 stars overall which is why Romance isn’t often my thing.