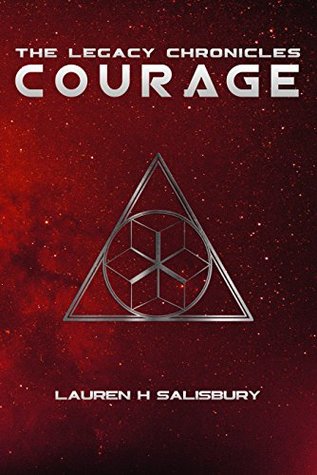 by Lauren H. Salisbury
Can one woman evade an alien empire to save her son’s life?

Gilla and Elias have the perfect life—or as perfect as life can be for slaves living deep in the Esarelian Empire. Elias wants freedom for his precious wife and daughter, and the rest of their people, and he is willing to fight to get it. Pregnant with her second child, Gilla only wants a happy, healthy family who share a strong faith in the God of Old Earth and to get through her workload each day.

When the Esarelians decide to teach their rebellious slaves a lesson they will never forget, Gilla’s entire life is turned upside down. She must trust that God has a plan to protect her new-born son, and have the courage to follow it, choosing the strangest of allies in an effort to ensure his survival.

REVIEW: *I received an eCopy from the author for review. This does not affect my review.*

I found out about this book at the end of last year when the author was looking for beta readers. Sadly I wasn’t able to finish it in time, but am excited I found it and had the chance to read the finished copy for review!

It’s not often I find a Christian fiction that doesn’t revolve around romance, and this one is also the first sci-fi I’ve found with Christian faith as a factor! I was worried about it being a Christian science fiction story at first, because lately people have been making fun of Christian faith, and I knew nothing of the author or her books. I’m happy to say that fear was unfounded, and Lauren Salisbury does a wonderful job with this story!

This is a very character-driven story, and because of that, I felt it took a little while to really start. The first few chapters introduce us to Gilla and her brother Than, along with Gilla’s two children Mirami and Elias. I enjoyed both characters, but my favorites are introduced later. Gilla and Than are human slaves on an alien planet. They pray to the God of Old Earth for redemption. Their masters Esarelians are an alien race that is mostly made up of warriors. Then we meet my favorite characters, Reemah, the Esarelien princess, and her friend Velay how is half-Esarelian. These two are always up to something, often to Reemah’s father’s dismay. Mirami also proves to be a strong character despite her young age as her helps her mother care for her baby brother.

The plot reminded me a bit of a Moses retelling but was well done, and interesting. I don’t want to give too much away, so I won’t go into detail, but I will say that Gilla’s husband and brother are part of a resistance movement on U’Du the alien planet. When their mission to leave the planet goes horribly wrong, there are severe and unforeseen repercussions that affect all of the human slaves.

This is a wonderful debut! I am excited to read more of Lauren’s work. I enjoyed this book immensely, and can’t wait for more!

Hey, I'm Stephanie. An avid reader who often reads NA/YA books including Fantasy, Dystopian, and Retellings while occasionally reading other genre as well. I also have a deep love for indie books and tend to share about mostly indie titles. I do read and post Tradition published at times books as well, just whenever one catches my fancy! View all posts by Books Less Travelled